Fish tacos are one of my favorite ways to eat seafood. I was never a huge seafood eater as a child (with the exception of clam chowder), but as I started cooking, I started trying to combine different flavors and textures with fish.  And now I am a fan.

These fish tacos are made with cod that is marinated in a lime dressing mixed with lots of aromatic, Mexican spices.  After being lightly pan fried, the fish is placed in a soft tortilla shell and topped with avocado, slaw, and a light chipotle lime crema. Garnished with some cilantro, these tacos are a winner!

Step 1: Cut the cod into strips.  In a small bowl, mix the ingredients for the marinade.  Pour it into a ziplock bag or an airtight container and add the cod, turning to coat.  Let marinade in the fridge for a few hours.

Step 3: In a small bowl, combine all ingredients for chipotle lime crema. Refrigerate until you are ready to assemble the tacos.

Step 4: Heat the 2 tablespoons of olive oil in a cast iron skillet or frying pan over medium heat.  Take the fish out of the marinade and discard the liquid.  Cook the fish on the skillet approximately 5-8 minutes or until cooked through, turning once. 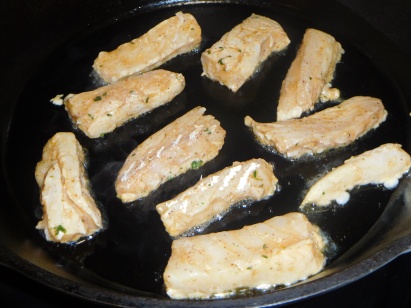 Step 5: Let the taco assembly begin!  Start with a flour tortilla, then add a little slaw, a few avocado slices, and a dollop of the crema.  Garnish with some fresh cilantro, and bite into that bad boy! 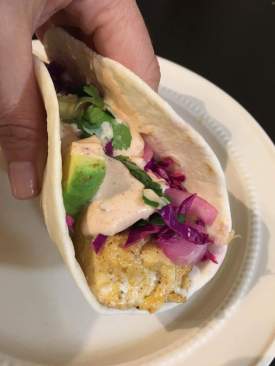