Chinese is always a favorite for take-out.  However, it is not always the healthiest option.  Of course, on those days when you want to indulge, go for it.  But on a day when you are craving some chicken and broccoli and lo mein but do not want to go overboard on fat and calories, try this recipe! It’s a variation from your traditional Chinese take-out, but in my opinion, it tastes even better!  Marinated chicken breast is stir-fried with broccoli, onions, whole wheat spaghetti, and some whole wheat spaghetti to create a healthy, delicious chicken and broccoli lo mein. Garnish it with some sesame seeds, and you have a super yummy work of art!

Step 1: Make the marinade! In a small saucepan, heat the soy sauce, sugars, garlic, ginger, and ½ cup water over medium heat and stir until it just starts to bubble.  Turn off heat, pour ½ cup of the marinade into a small cup or bowl and allow to cool completely (I help it along by sticking it in the refrigerator until it is at least room temperature). Reserve the rest of the marinade for the sauce.

Step 2:  Cut chicken into chunks and put it into a Ziplock bag.  Pour the cooled marinade into the bag with the chicken. Allow the chicken to marinade in the refrigerator for at least an hour.

Step 3: Put 1 tablespoon of oil in a large frying pan (or wok) and turn heat to medium-high.  Remove the chicken from the marinade (discard the marinade that the chicken was in) and transfer to the hot skillet.  Cook the chicken until it has started to turn slightly brown and it is no longer pink in the center- about 4-6 minutes, stirring frequently.  Remove chicken from skillet.

Step 4:  Boil water in a large pot.  Add about a tablespoon of salt.  Add the spaghetti and cook according to package directions.  Drain.

Step 5:  Heat another tablespoon of oil in the skillet over medium-high heat and add the broccoli, onion, and garlic. Cook, stirring often, until the vegetables are tender, about 6-10 minutes.  I sometimes throw a tiny bit of water into the pan if I feel that the bottom of the pan is getting too dry. Remove veggies from the pan.

Step 6: Whisk 1 tsp cornstarch with the remainder of the marinade. Heat on medium heat and stir until it has thickened into a sauce.  Remove from heat. 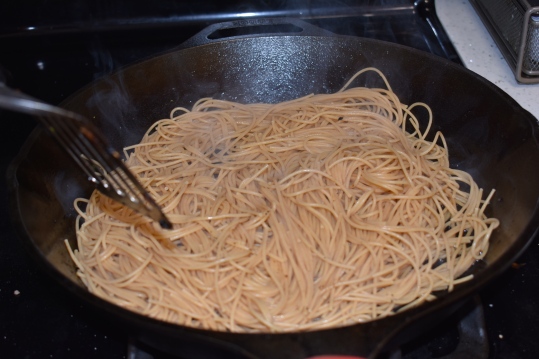 Step: Plate it up and sprinkle with sesame seeds. Now grab your chopsticks and enjoy!